It's finally happened - Minecraft 1.11 has arrived on DWO! This update brings a suite of new features from Shulker Boxes to Llamas, plus a brand new TARDIS update for DWO! Bear in mind that there'll be a few features you won't be able to experience on our server - the new Woodland Mansions and the Illagers, and the exploration map probably won't be much use when we have a dynmap.

There's two big new TARDIS features which I'll give a little guide to now, as well as a handful of smaller bits and bobs and fixes.

You can now save your custom console designs into your TARDIS archive, and regrow them later whenever you like! To access the archive, you'll see this new button added to the /tardis desktop menu: 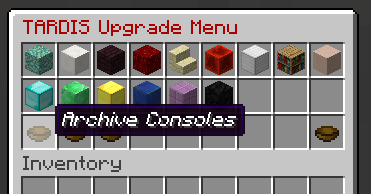 Inside you'll see a list of all your archived consoles, as well as a few other buttons for managing your console. 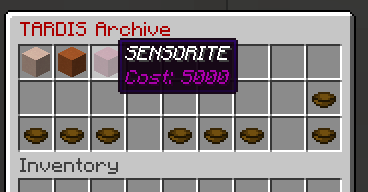 To archive a console, you can either click the Archive Current Console button from this menu (which will give it a random name!), or do /tardis archive add [name]. You can then add a description to remember what is is with /tardis archive description [name] [description]. You can only have three consoles saved for now, so choose wisely!

There's also 3 buttons at the bottom of the menu to access three different sizes of "empty" console templates. They're all just big ugly cobble boxes so really it's easier to just use the blank console and build the size you want inside it.

Bear in mind though - this feature is very touchy. It doesn't seem to take much to break it. I wouldn't count on it for storing your precious console designs in, and if you finish one that you like it might still be wise to get it moved to Console Square for posterity. Usually if it gets broken it seems that just jiggling around and clicking different buttons unjams it. Or makes it worse.

And the other new feature is a revamped version of an old one - the all new Chameleon Circuit!

Your circuit now looks like this, with five different modes to choose from. The green block indicates which one you've currently got active. 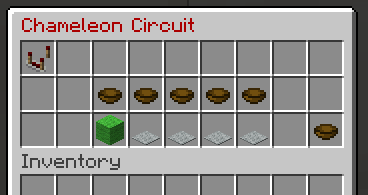 Once you're done picking, remember to press the 'Apply Now' button in the top left to activate your disguise!

The TARDIS construct also has a nice new feature, which is customising the sign text on your TARDIS. To set your own, just do /tardis construct [line number] [text], then rebuild.

There are also two new TARDIS rooms! The Stall room is just like the Stable room but for llamas (unfortunately the farming feature likely won't work still, sorry!). There's also the new Smelter room, which lets you mass smelt items. Just throw everything you want smelted into the centre chest with enough fuel, and the TARDIS will automatically space them out across all the furnaces for maximum efficiency. Obviously this won't be too helpful in Creative, but it's still pretty cool. Both rooms are available now in the store, and will be added to Hedgewicks soonTM.

(This update also fixes the big bug that's been crashing the server unfortunately frequently lately, as well as a few others. Fingers crossed we should be back to normal on that front now!)

I hope you all enjoy, and as usual if you have any issues make sure to give a staff member a shout asap and we'll see if we can fix it!